"the truth and simplicity of nature are always the last elements of significant art." 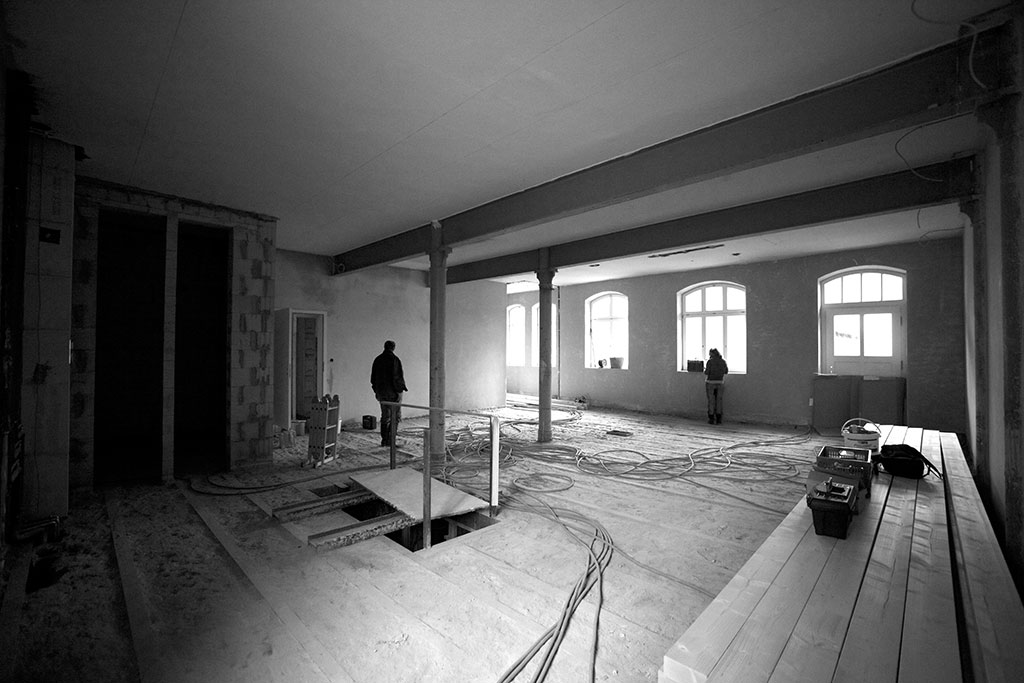 "zen-monasteries were nothing else but living quarters and study rooms for the monks. they lived, practised and worked in the temple. they searched for the meaning of life within themselves, without external distractions. the zen temples are sanctuaries of their own kind. their rooms are simple and austere, even the main hall is unadorned unlike the usual flamboyance of of other buddhistic sanctuaries."

[a description of japanese monasteries]

concept development "experiment silence" as basis for the interior design and the [partly experimental] installations of 22quadrat‘s working world. 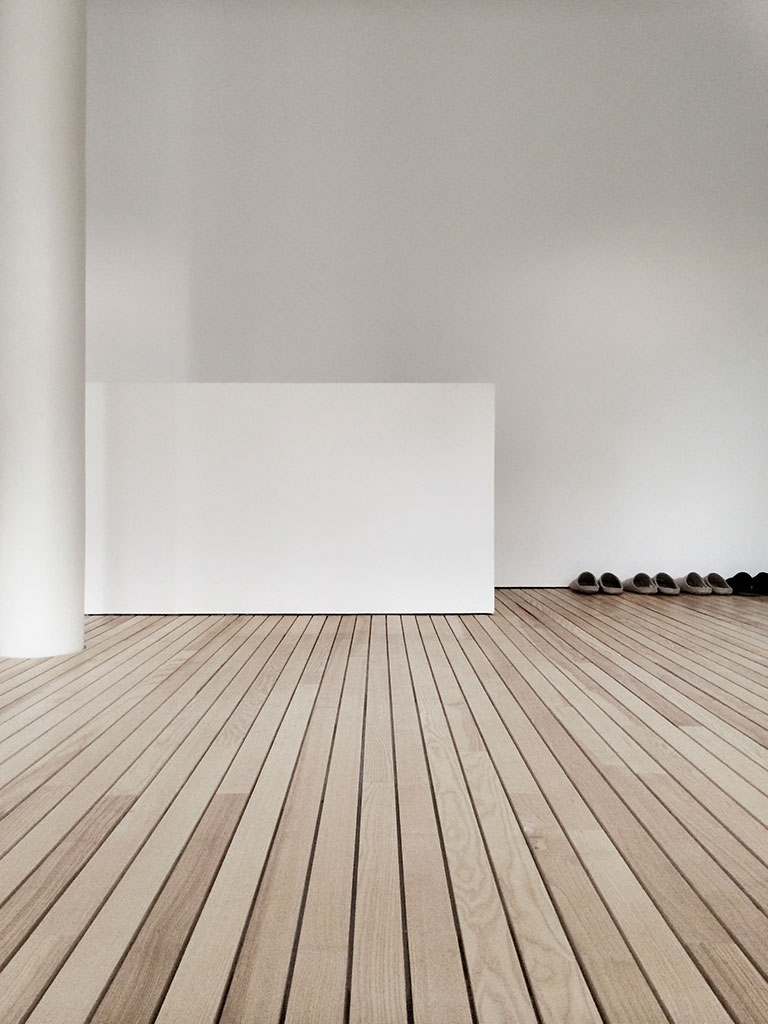 sparse and subdued light characterises the room during the day. tranquility and concentration are a result of a quiet and diffuse atmosphere. the sparse, incident light is reflected by white walls. the austere and empty space, with only a few pieces of furniture, enhances this effect. the skin of the old building is exposed behind open shelves. raw bricks – crumbly, coarse, matt – are visible behind the books while working in the library.

the subliminal tranquility of the room reflects on the social interaction and the handling with tools. the atmosphere resembles a haze and creates an entrance to the present. the chaotic outer area of the city is replaced by a modesty without disregarding the external; the view on the surrounding urban landscape of the aikido-studio, the train tracks and the adjoining industry are not only preserved but are emphasized by the emptiness of the surrounding space and will continue to be for their sake.

in dependence on the shakkei, the "borrowed landscape" – a traditional approach on japanese garden design – the exterior is "caught alive" [ikedori] and is an elementary component of the culture that is located here. it is reinventing itself, and, through its transformation, is experiencing its now pending evolutionary change with the recognition it deserves. 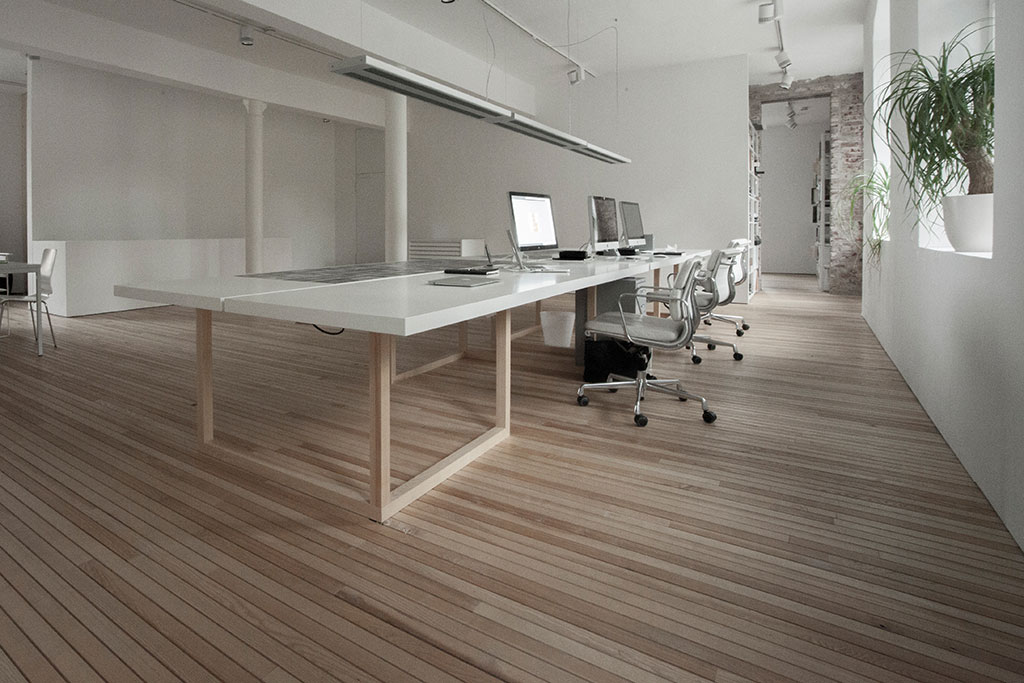 "here and only here, according to the myth of artistic creation, in an intimate room of monkish avoidance from the profane social world, in the mysterious aura of the artist, energy starts to flow. only here the spark will be ignited to become a masterpiece eventually." 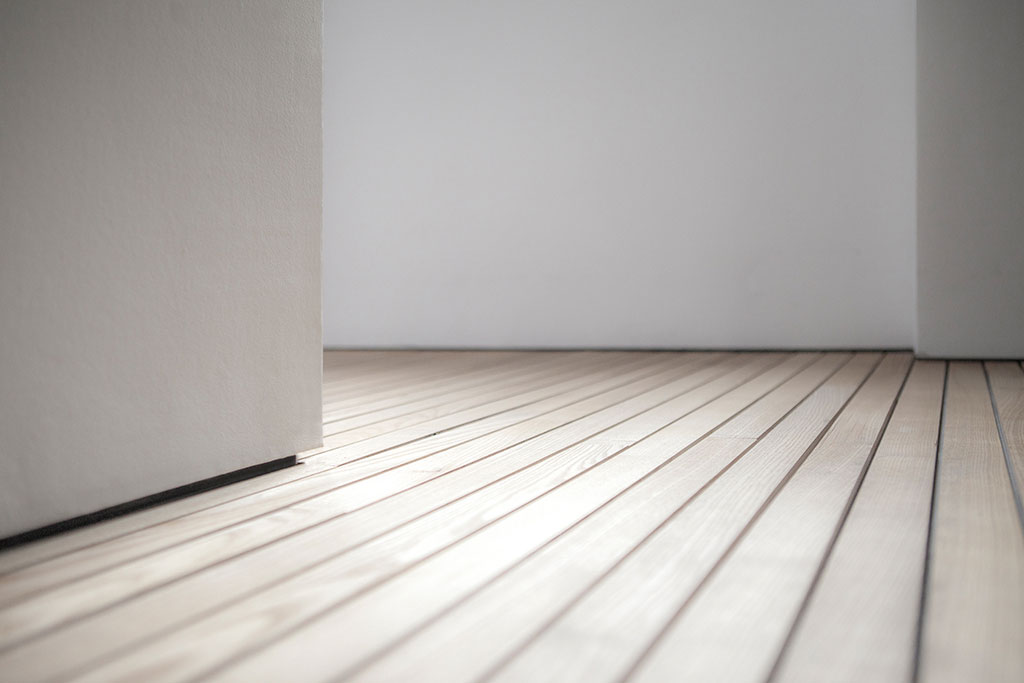 expensive or well-known material and things will not be obstructed for their own sake. the interior remains convenient, functional. the zeitgeist or decorative design will not be considered. unnecessary costs for outwardness are avoided.

nothing is hidden, everything stays visible - brittle maybe, but accessible, honest. a major rule play robust, modest furniture and installations as required, proclaiming their purpose and deeper designation and aura through unfolding, revelation, advocacy - rewarding second glances. they primary fulfill their own best purpose. no more, no less.

everything used for unfolding and exerting the mission is characterized by persistence. quality in truthful, honest and meaningful design serves the inspiration and the permanent remembrance of the great demands on the own work. still, the great tools are just tools - plain, modest, functional, intertemporal - from the etching needle to writing-tools to contemporary use of the computer and its benefits.

the dedication and love in development and emergence of every used item should reveal in usage, the requiered appreciation and by that the conscious handling should be supported. nothing is arbitrary, anything lives, growes, developes with the user; gets part of him and his process, which he undergoes. longlasting relationships between mankind and tools are target values.

mankind and the tools, books, drawings, studies, computer, materials adopt the space as he does; the concentration lives from the silence in the arranged chaos, the culture medium for expressive and at the same time sorted creativity. 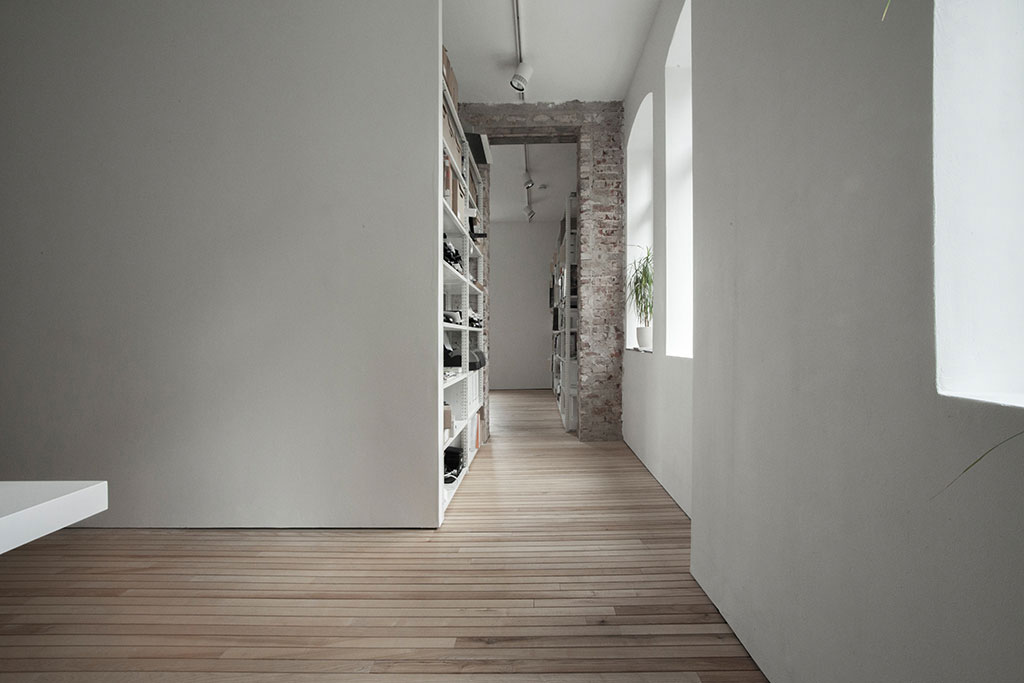 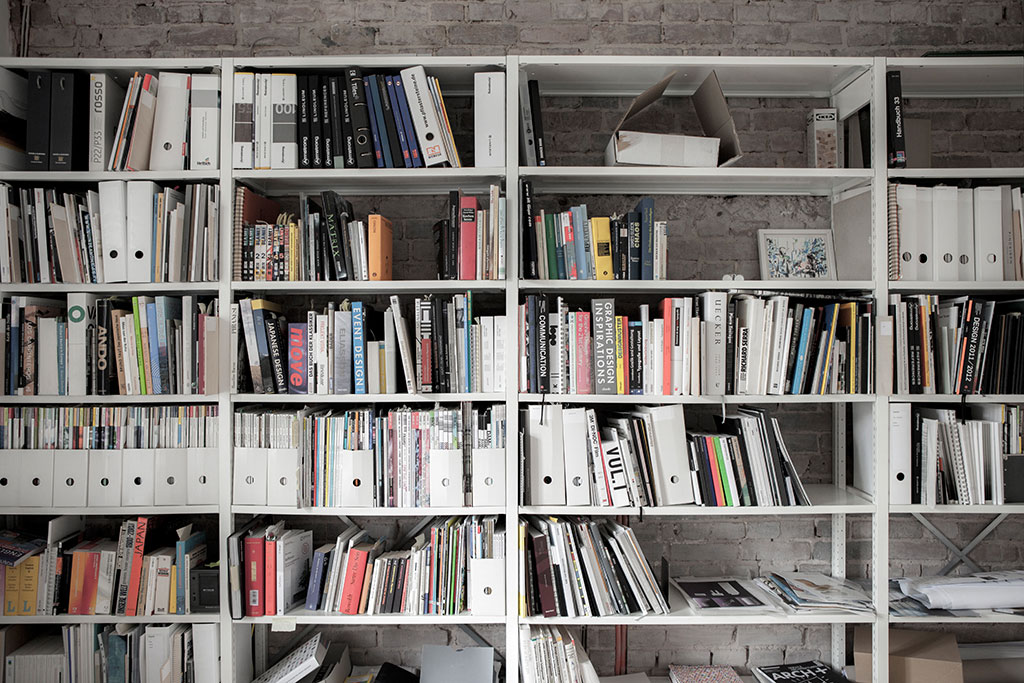 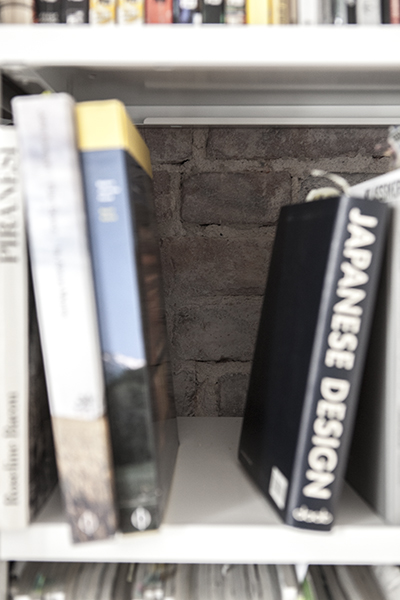 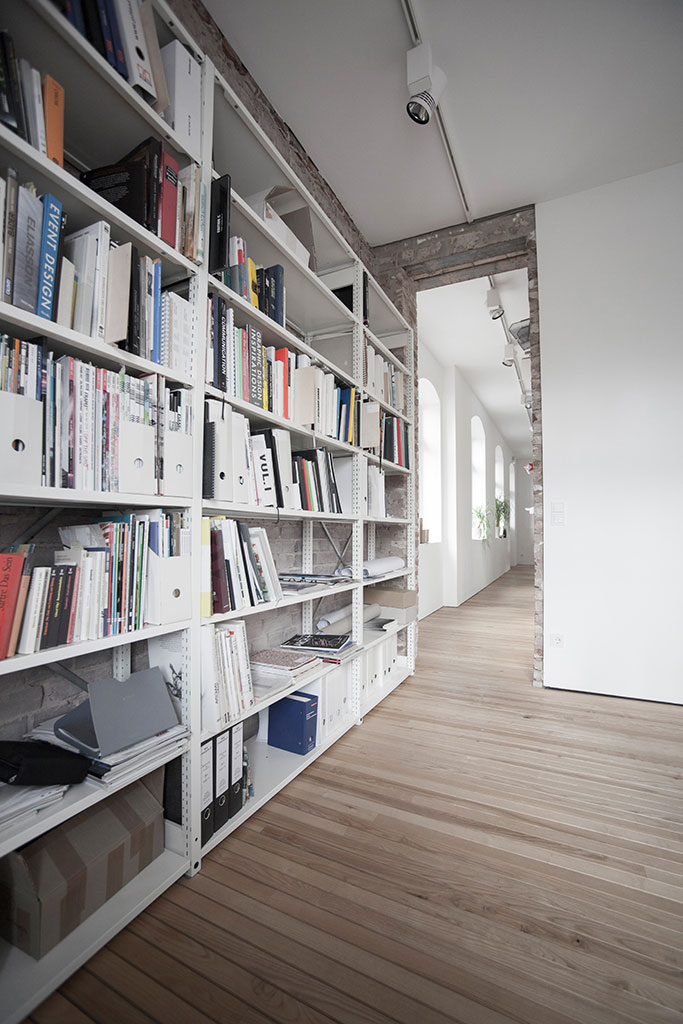 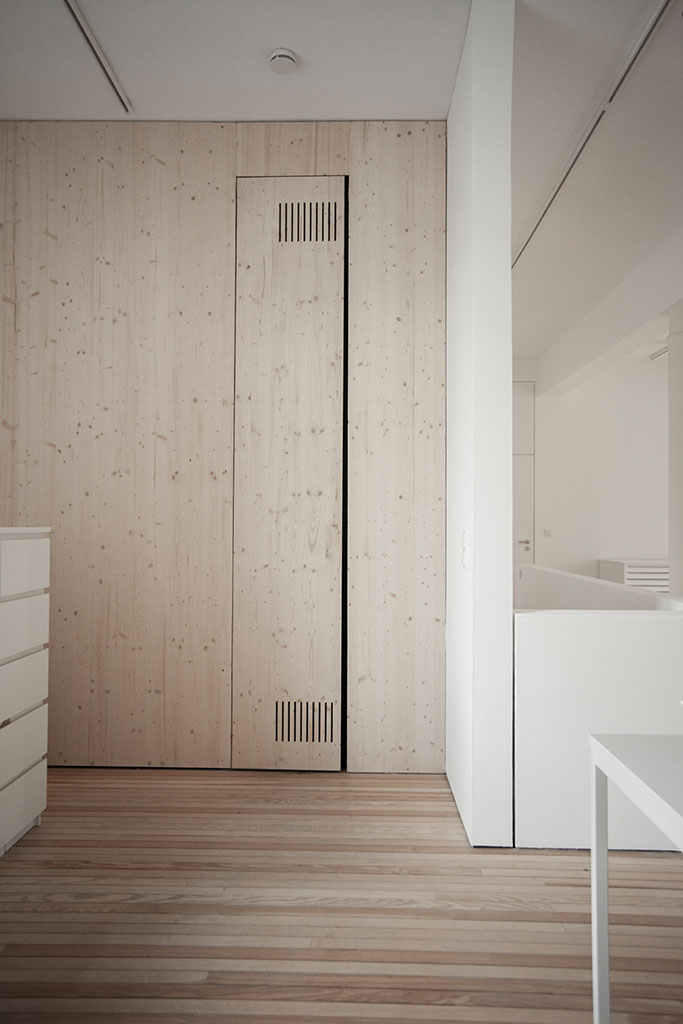 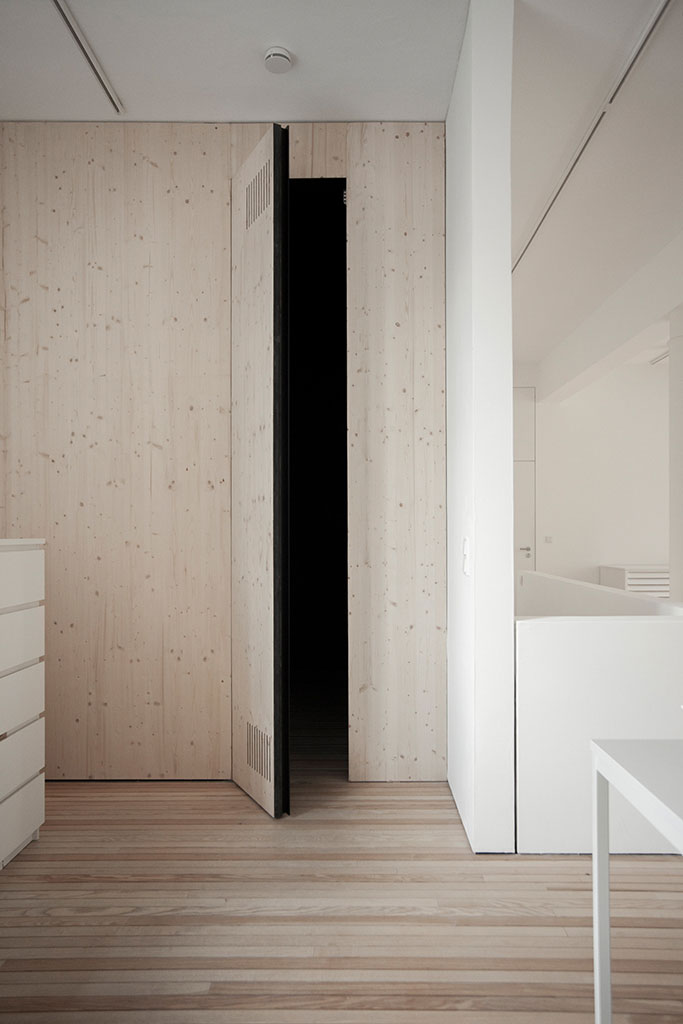 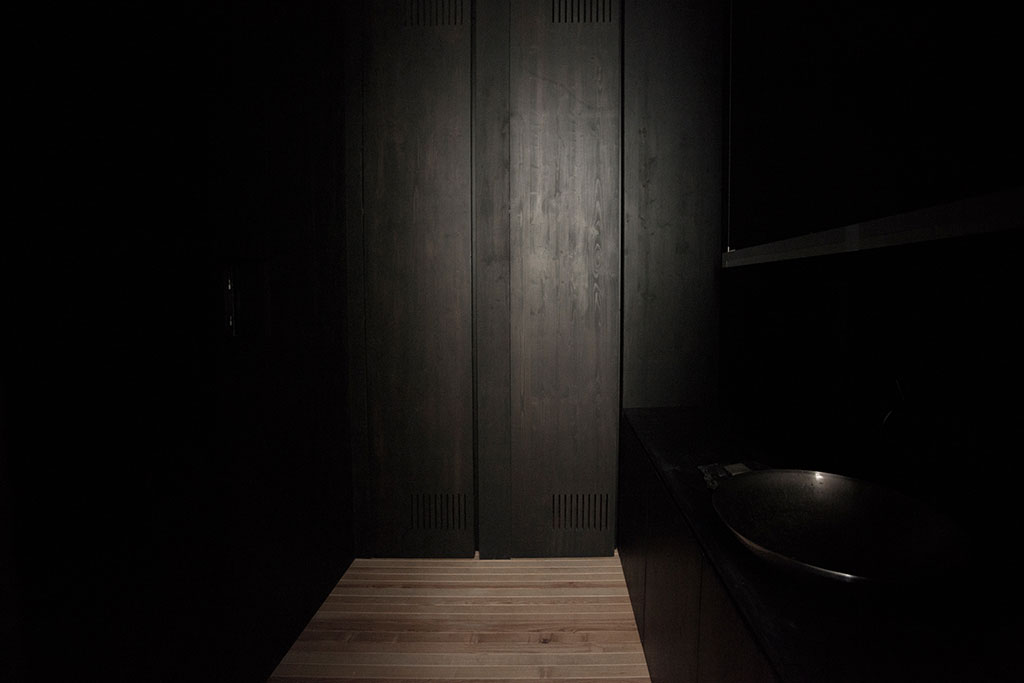 the only right way to handle the darkest corner of the whole room was to pay due attention to it. This meant to emphasise and keep it’s distinctive character. while the work areas were painted white, the bathroom was designed to allow for a moment of peace, a retreat from the world of complicated work processes – to find the inner self.

deep black viscous oil was worked into plain plywood. it was applied layer for layer and rubbed slowly and with awareness into the pores, grain and knotholes.

the difficulty was, like with ink or watercolour drawings, to master the colour intensity of the different shades of black. they were created in a long process of constant applying and removing the oil. some layers were sanded while still moist and the surface was sealed by the air-dry oil with a silk-matt smoothness.

the process was continued until some of the softer wooden layers were saturated with the blackness that now characterises the infinity of the numerous niches of the bathroom. while complete darkness could unfold in some places, other layers absorbed the oil more sparsely, as if they wanted to conserve the last glimmer of light in themselves. thereby they created something that no designer would have been able to produce on a rational level. just as little as the artist can replicate the inimitable mark of a spontaneous gesture that dropped from the tip of the pen onto the paper.

the aim was to refrain from the decorative and constructed moment of design to gain an intuitive understanding for the space and it’s inherent aura. the consistency of the seeping through blackness is an attempt to dissolve the known connections between material and dimensions to make the "beyond" visible. every moment shall be experienced consciously. the cleaning of the hands, the moment water touches the skin and combines with soap. nothing shall distract. 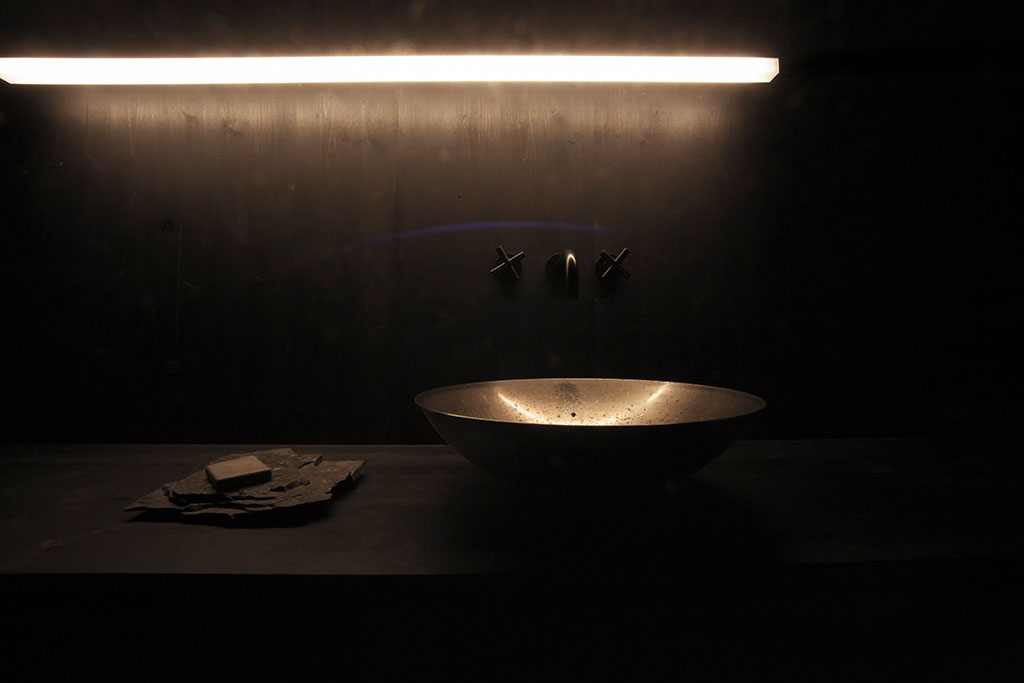 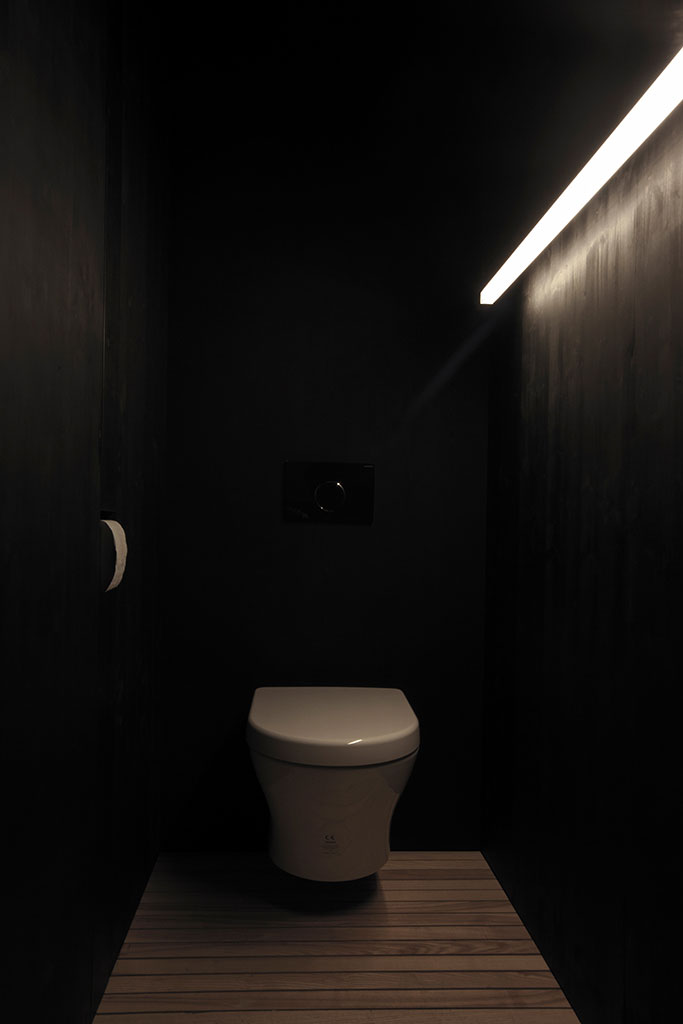 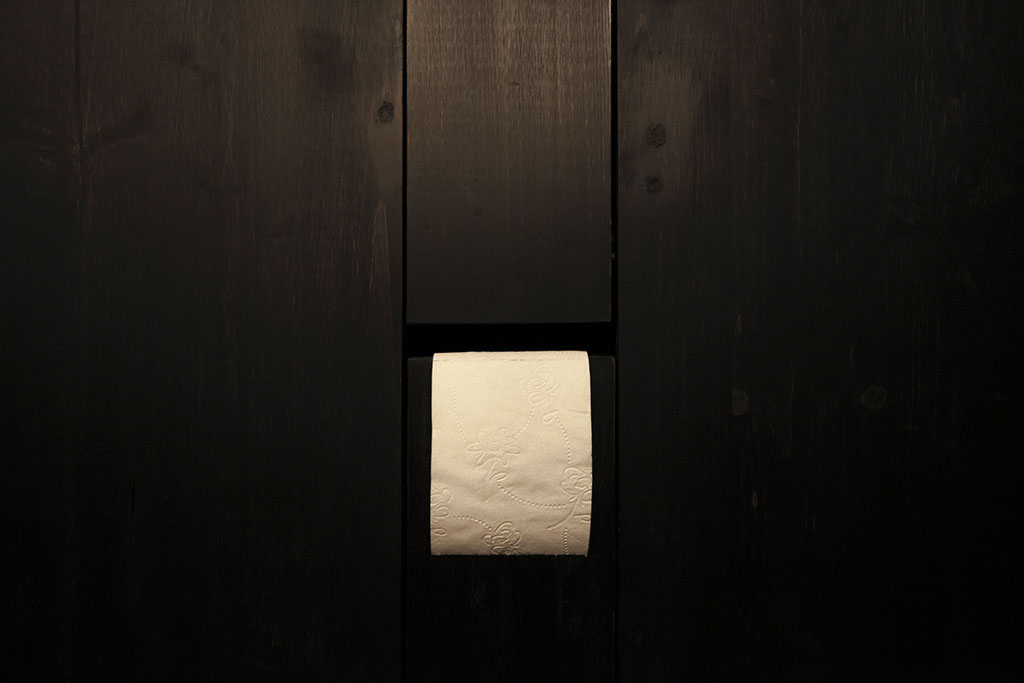 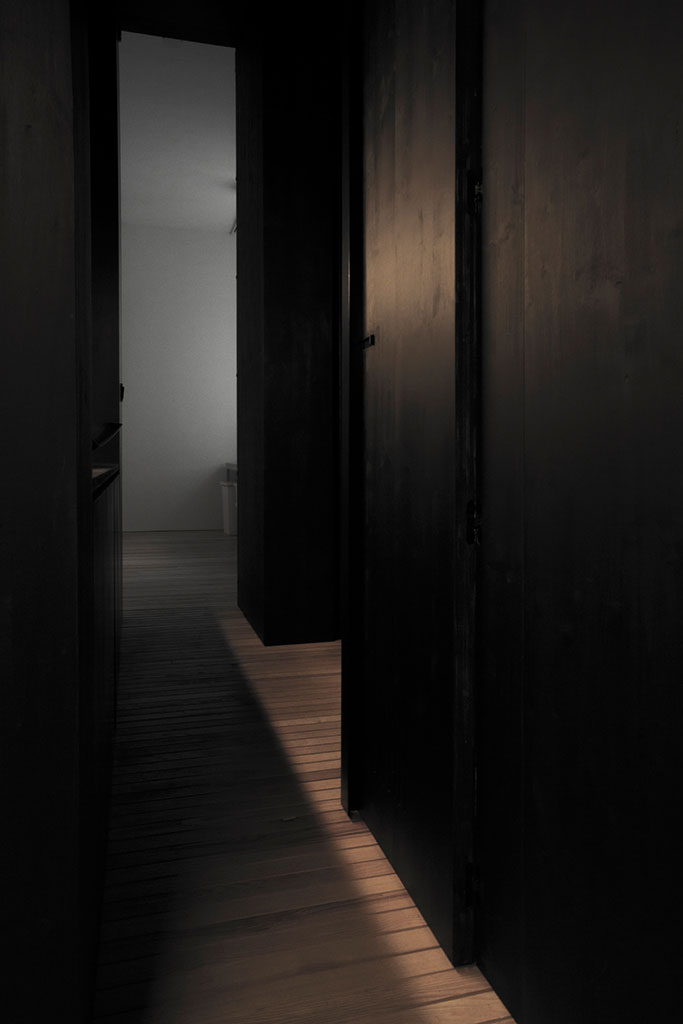 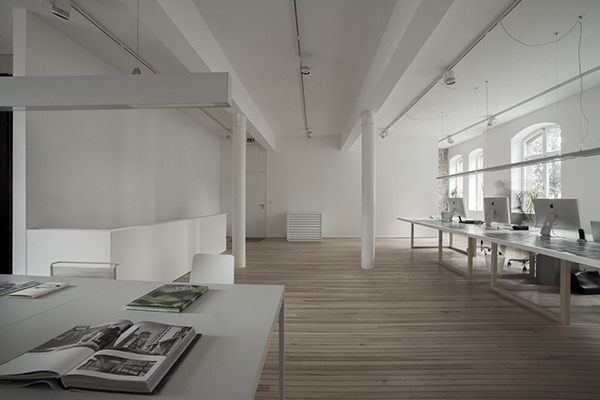 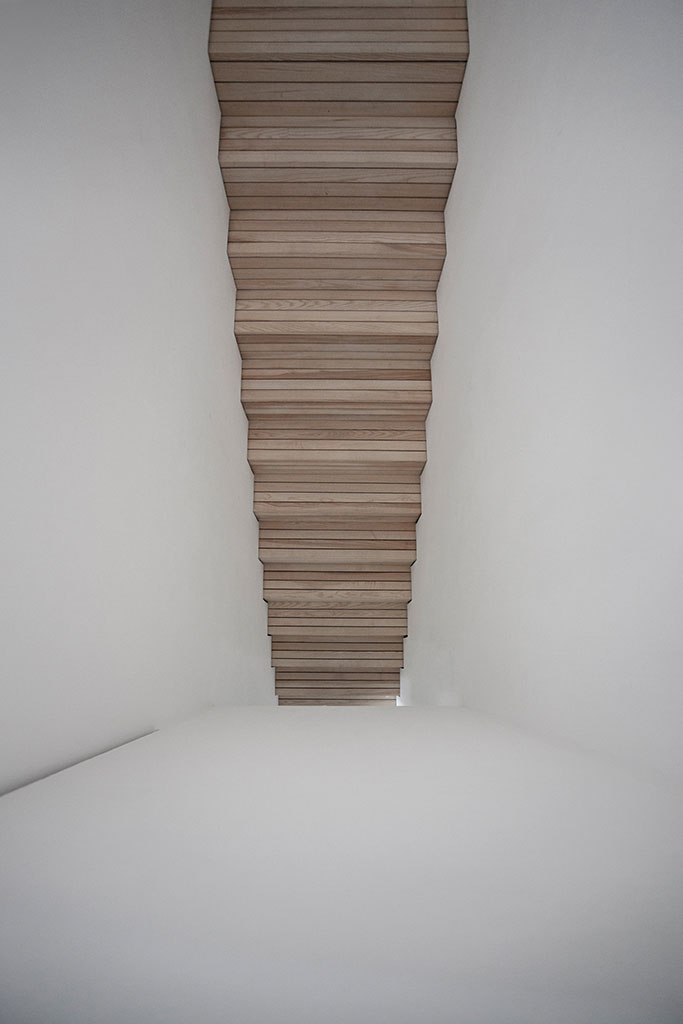 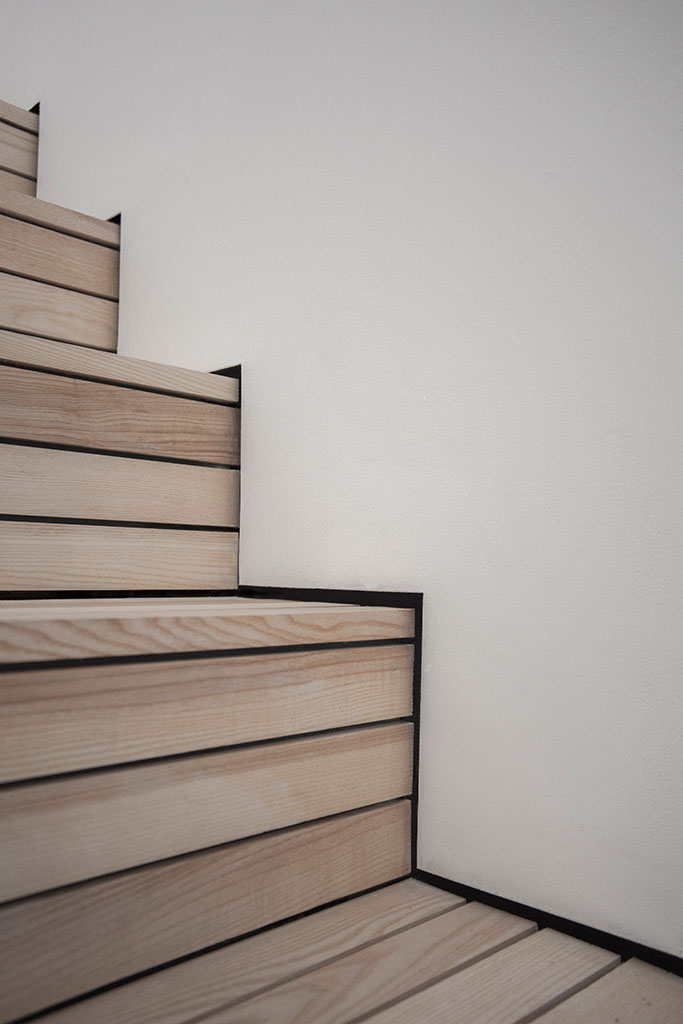 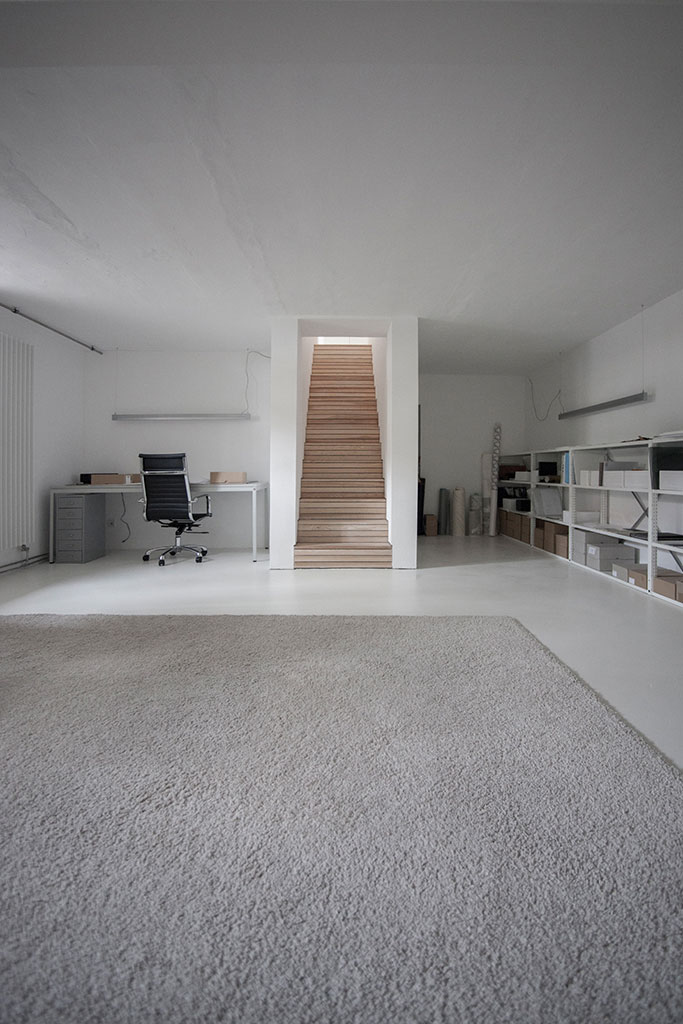 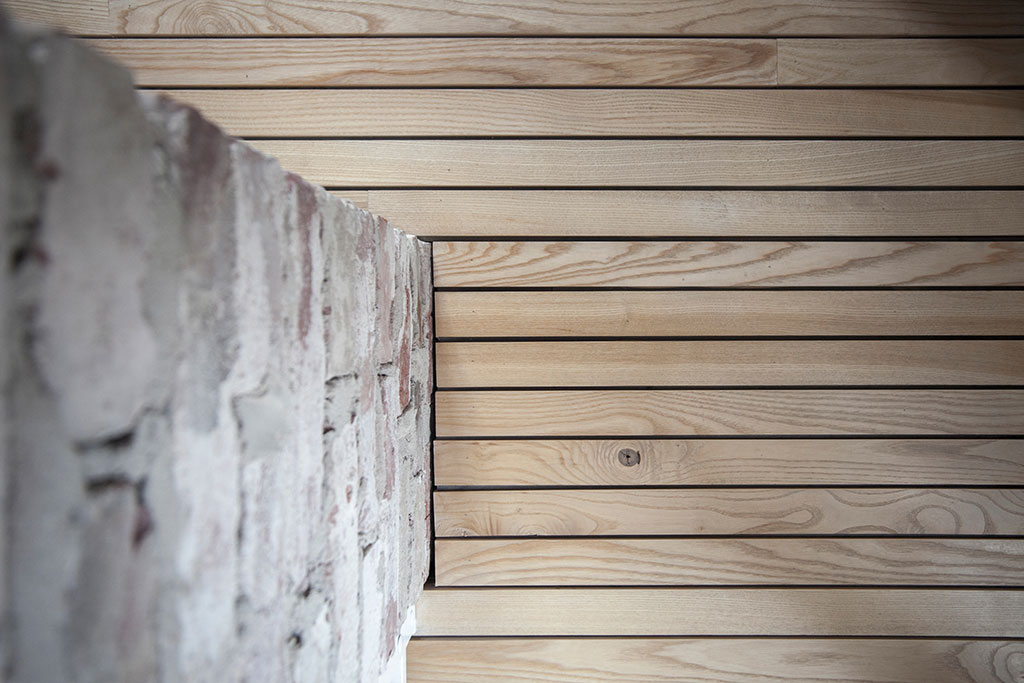