"consult nature in everything and write it down. whoever believes himself able to remember nature's countless teachings is trapped by a faulty hope. memory is not that tremendous." 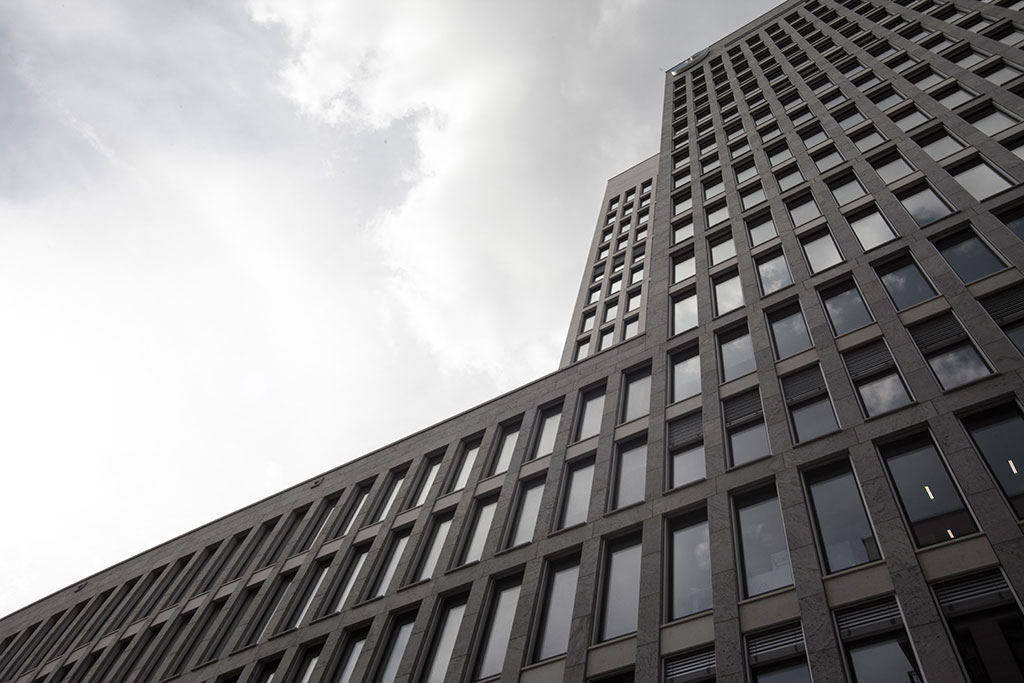 conception, design and implementation of a subtle but yet complex orientation system. it consists of almost 3000 signs and extends over 21 levels. 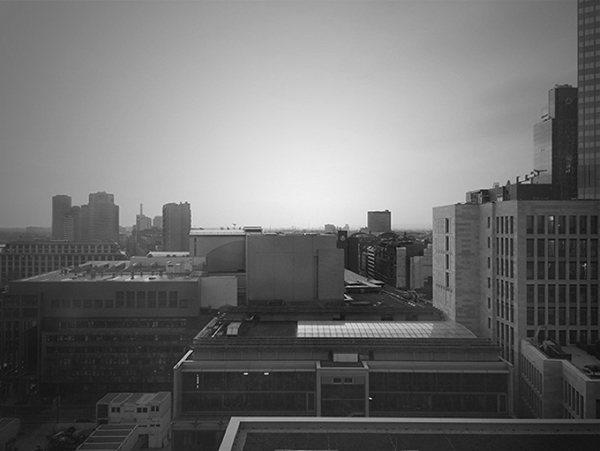 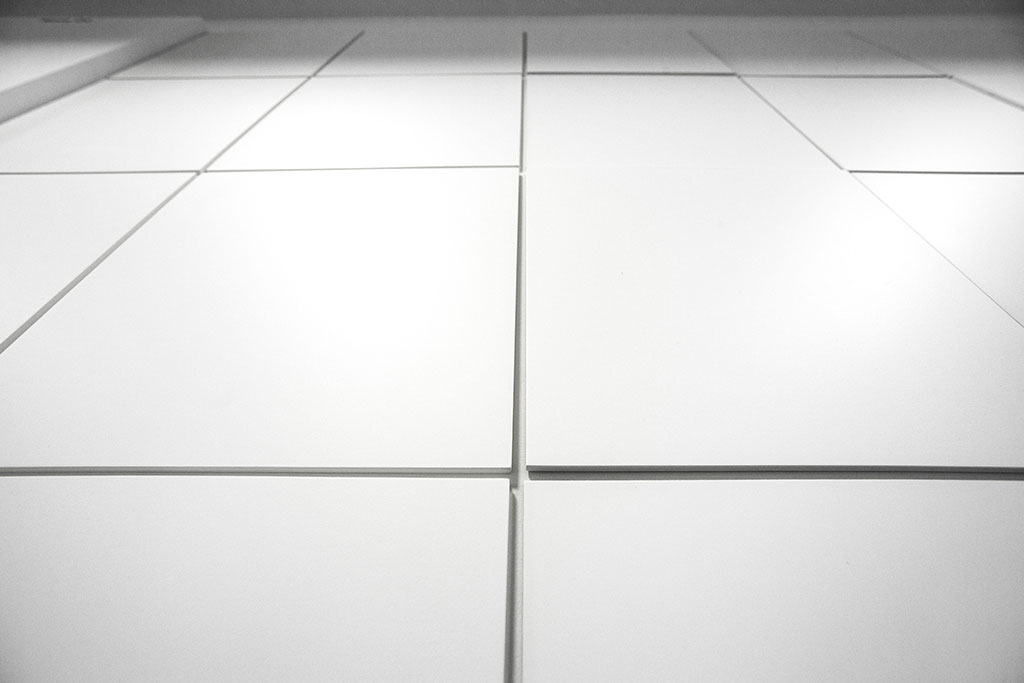 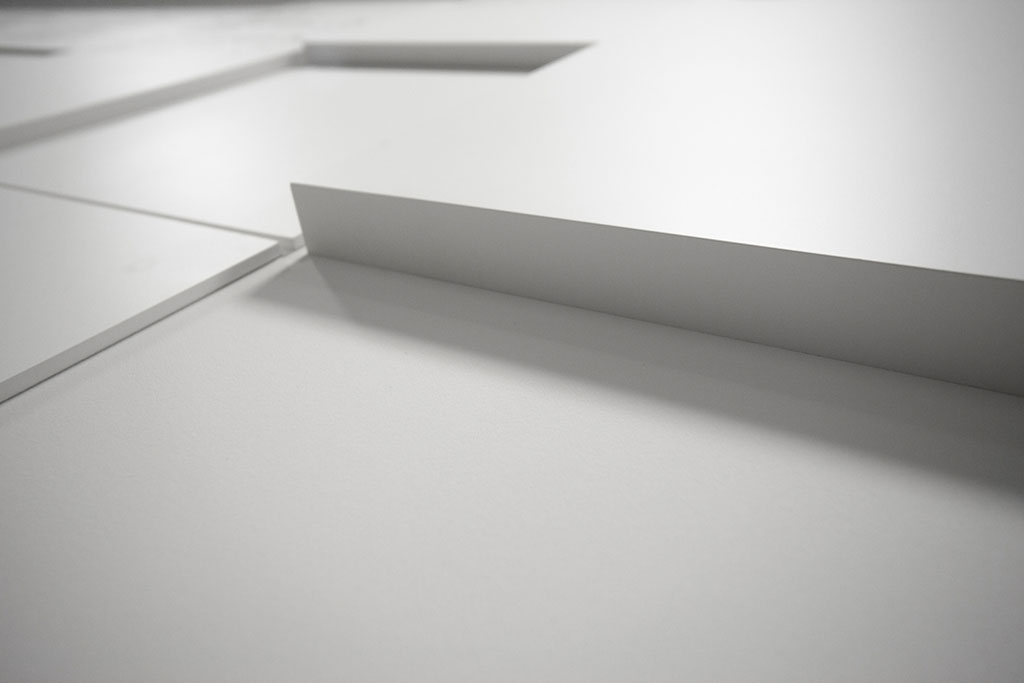 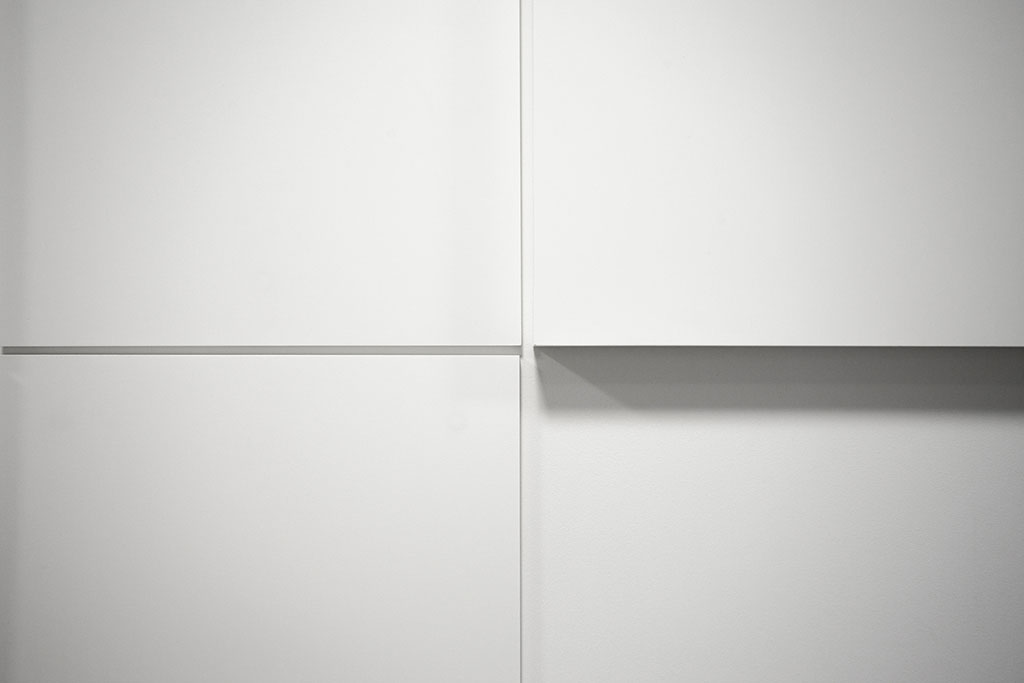 the flexibility of union investment was the basis of the concept and it became the main requirement in creating the signage system: it has to be able to react to every change without losing functionality or artistic quality. periodical rotating department relocations between levels are part of a grown corporate culture and were basic conditions to the signage system, its story and every other level of communication that complements the concept of adaption. a functional as well as intuitive experience of this culture was to be transferred to the rooms of maintor porta.

as a neutral and formally simplistic example of adaption the signage system serves on two levels of communication. in the form of squares and rectangles, it stretches throughout the building like an organism. it sits on the walls, appears out of nowhere, builds itself up and disappears again into the empty walls. it informs; on the one hand due to its characteristics of wayfinding and signage. 24 individual main information panels are guiding through the building vertically. individual secondary information panels are guiding horizontally through each floor. on the other hand it allows an intuitive insight to the values and believes of union investment.

all formal placements are derived from local and functional requirements – appearing in one way today and effortlessly adapting to different conditions and needs tomorrow. they stay flexible – just like union investment.

for the from level to level changing topographic circumstances, the signs come in seven different thicknesses. the largest sign exists only once on every level – being highlighted it displays the contents and departments of the floor.

the employed font is frutiger. developed by adrian frutiger in 1974, it is now union investment's characteristic font. in it’s condensed-cut the individual letters combine to a clear unity that can be easily deciphered both from distance and in motion. 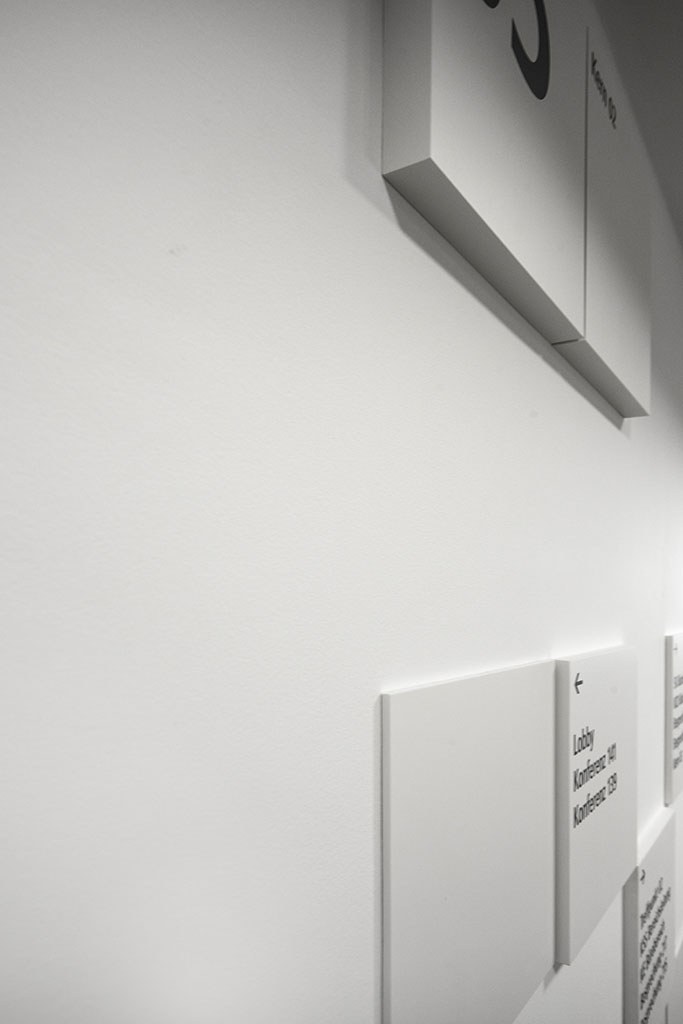 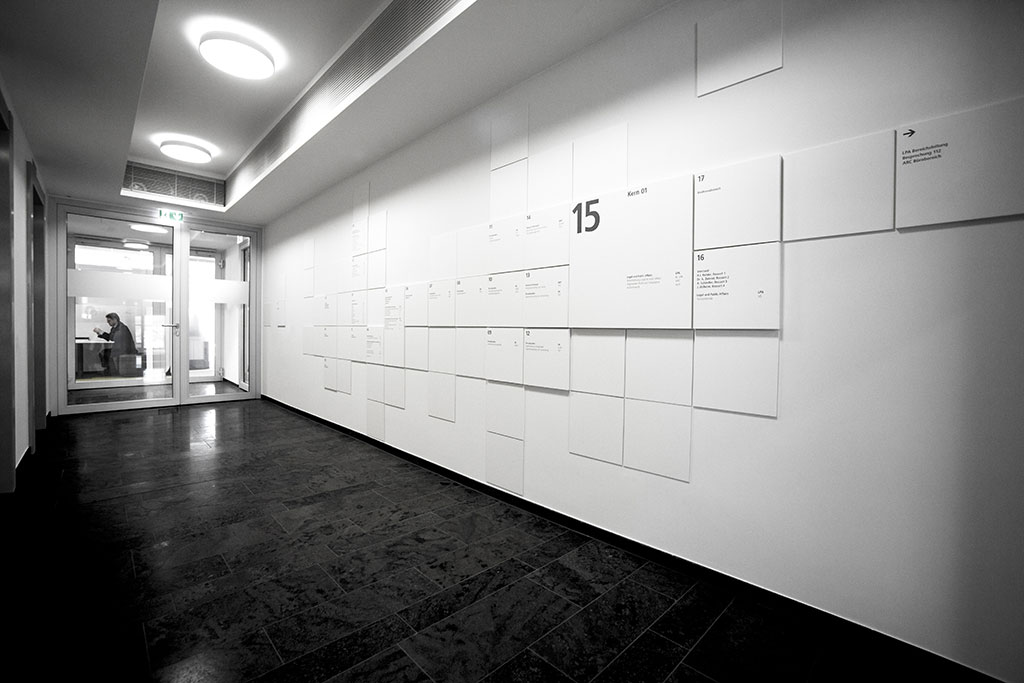 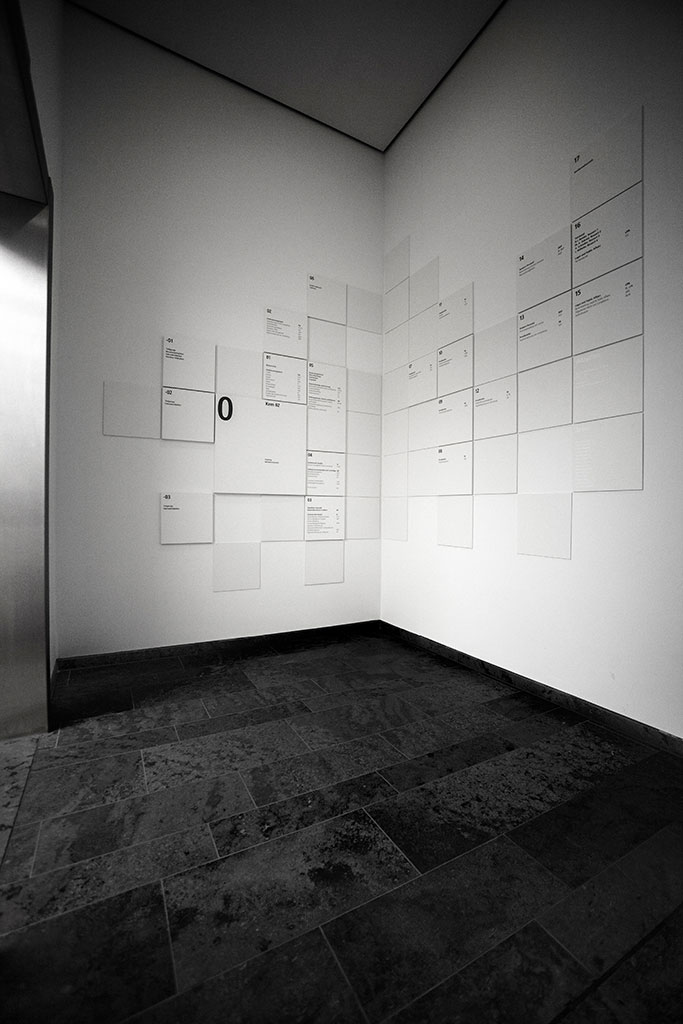 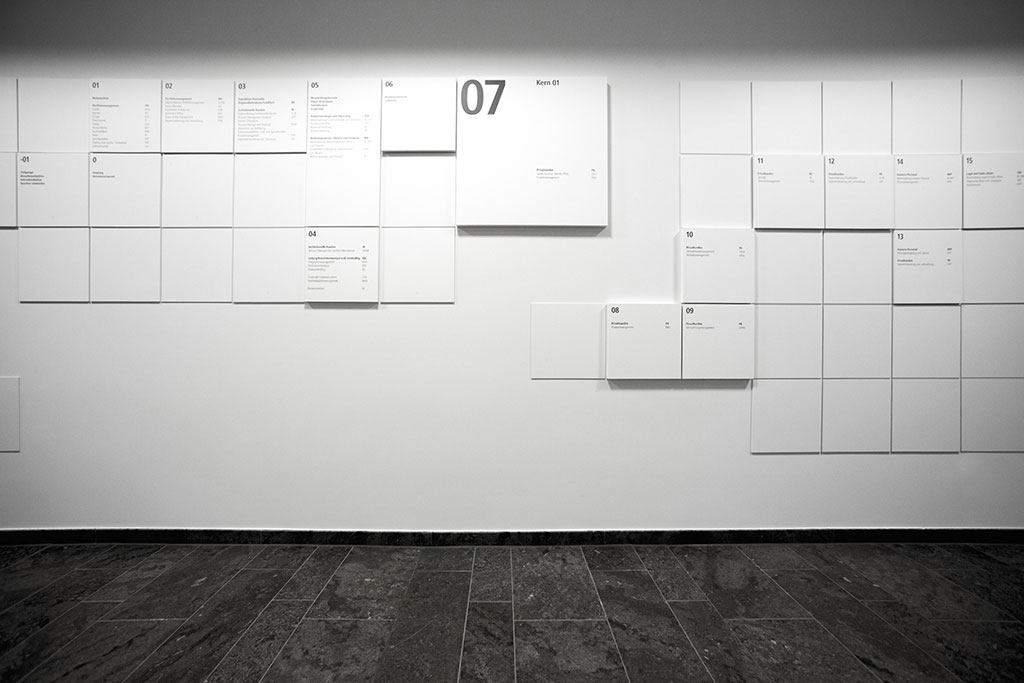 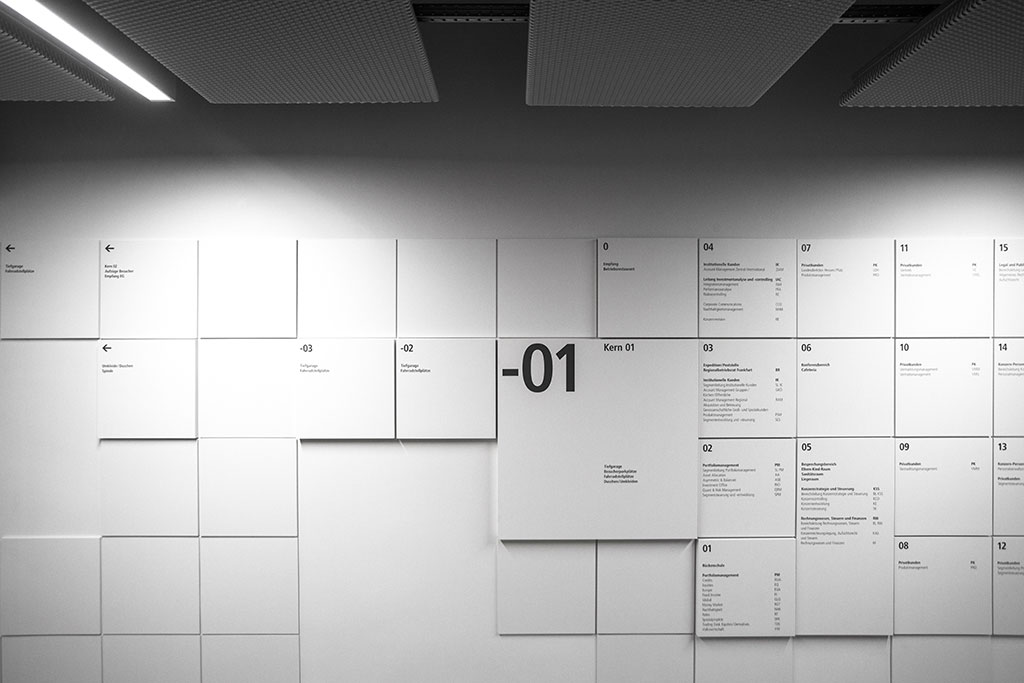 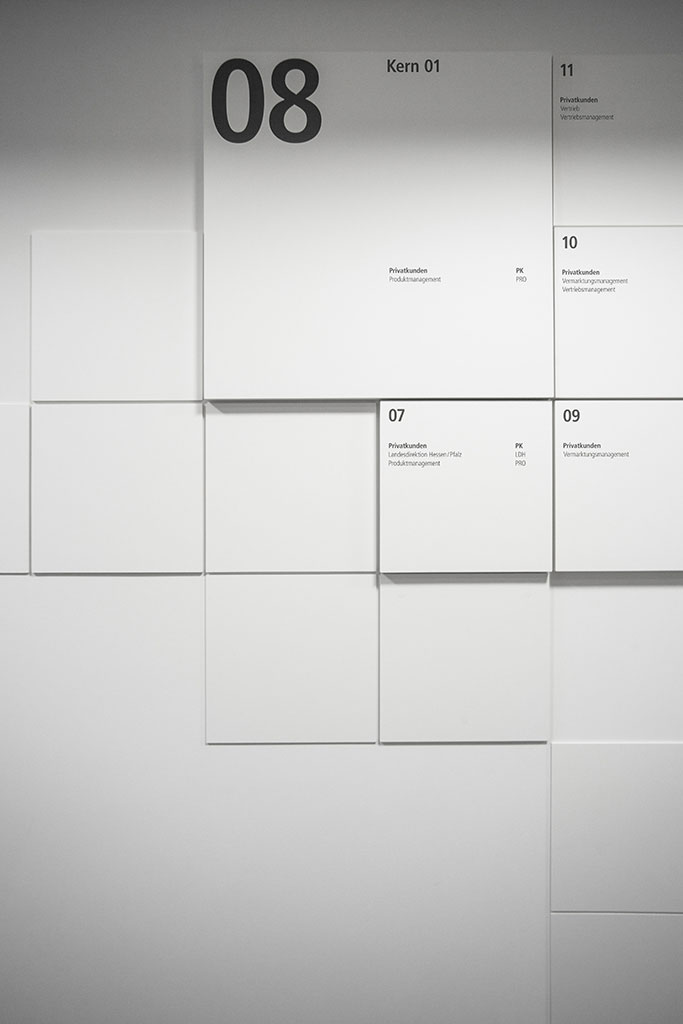 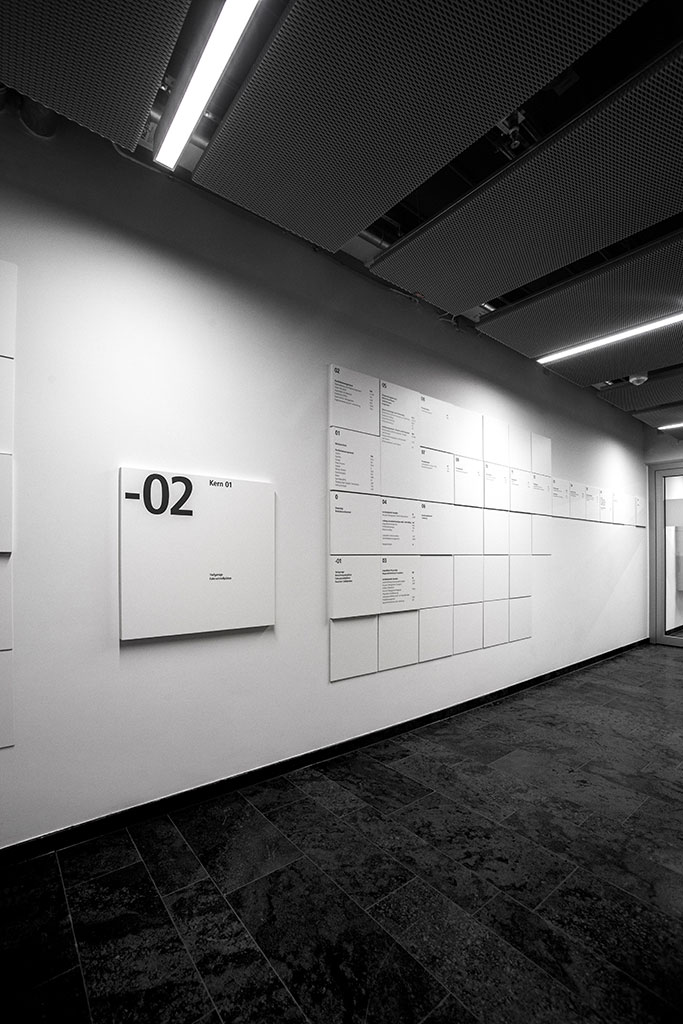 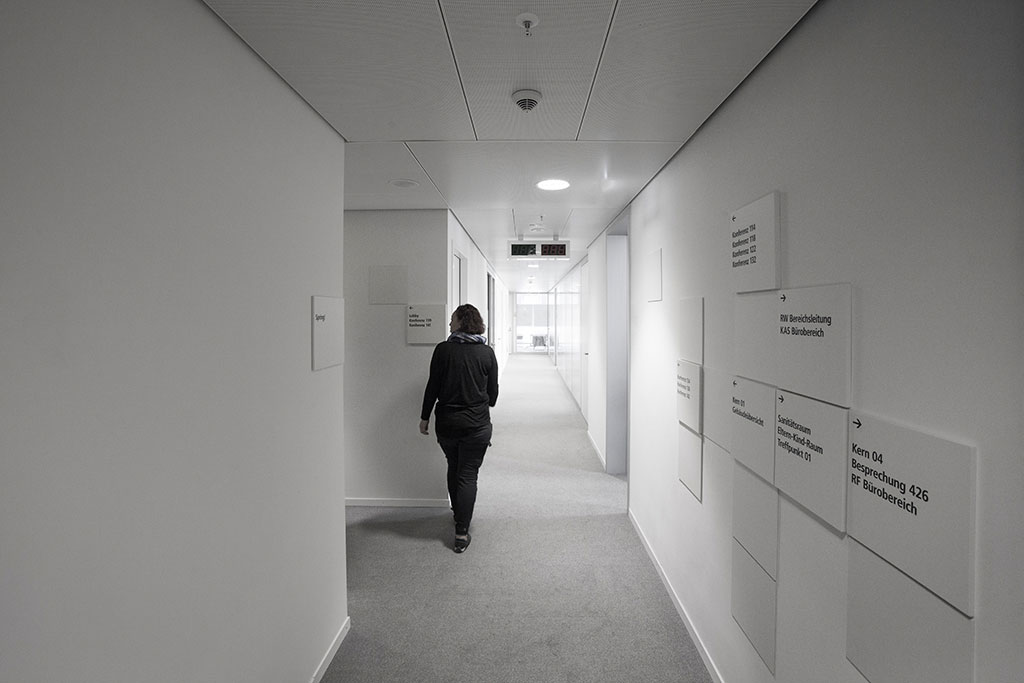 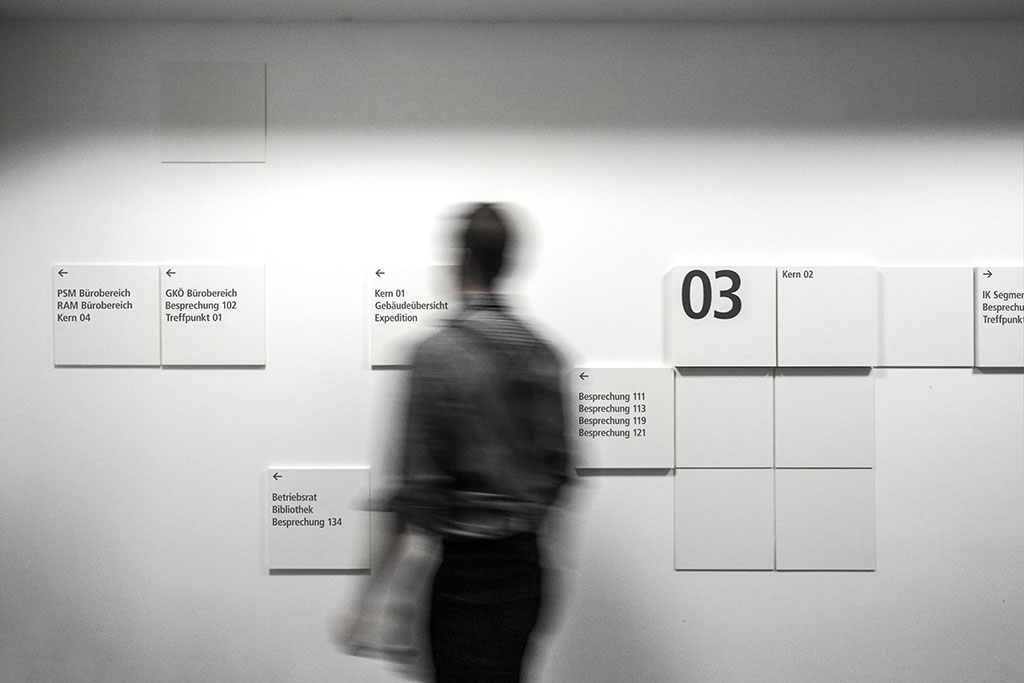 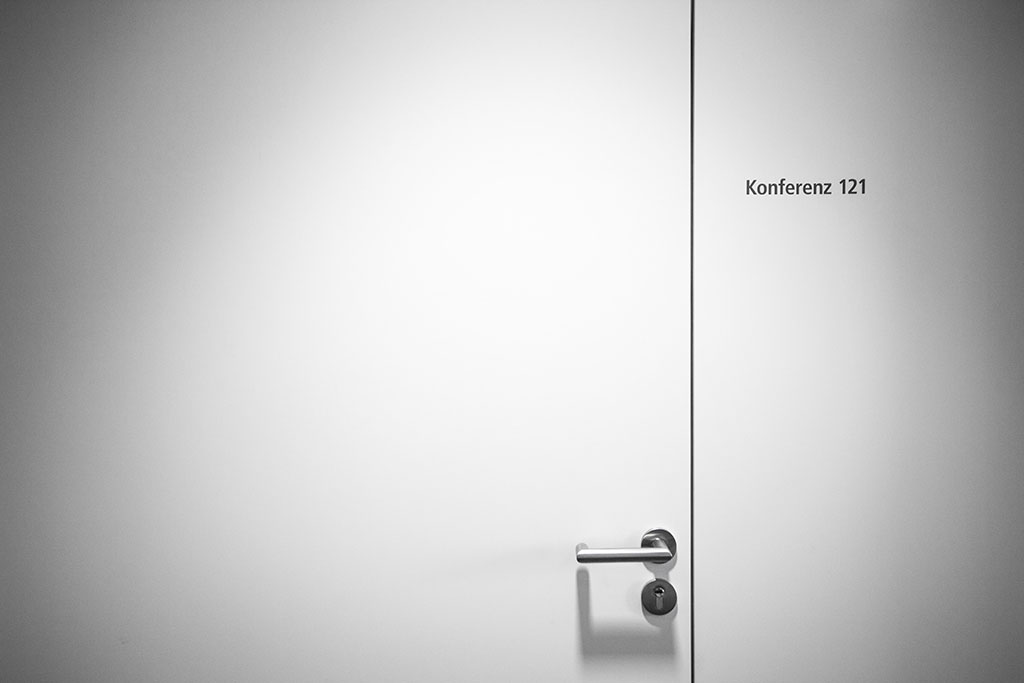 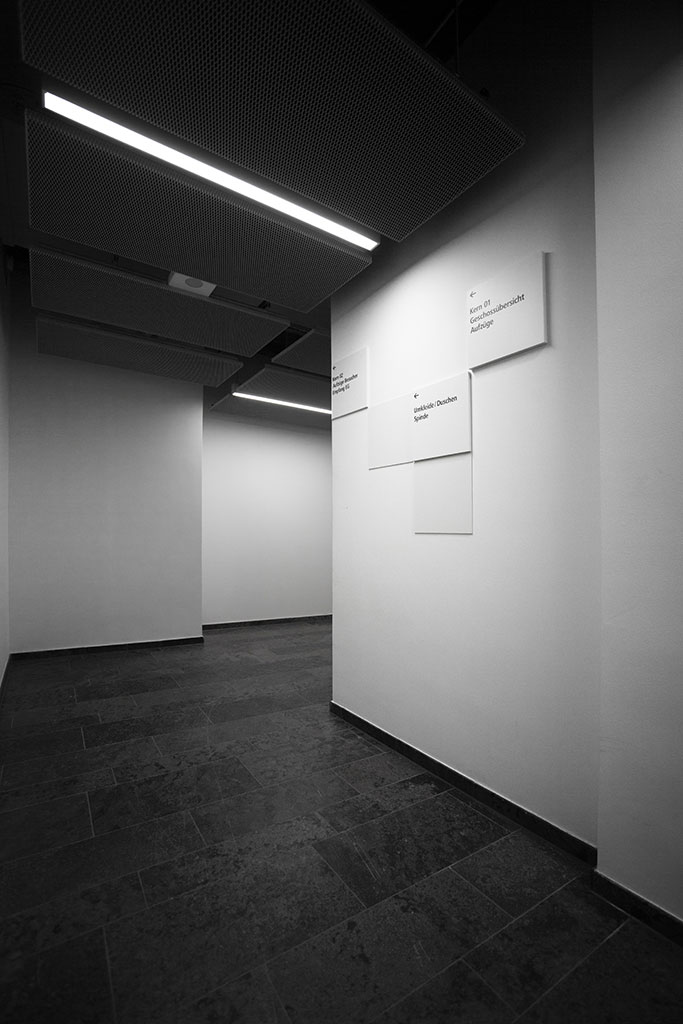 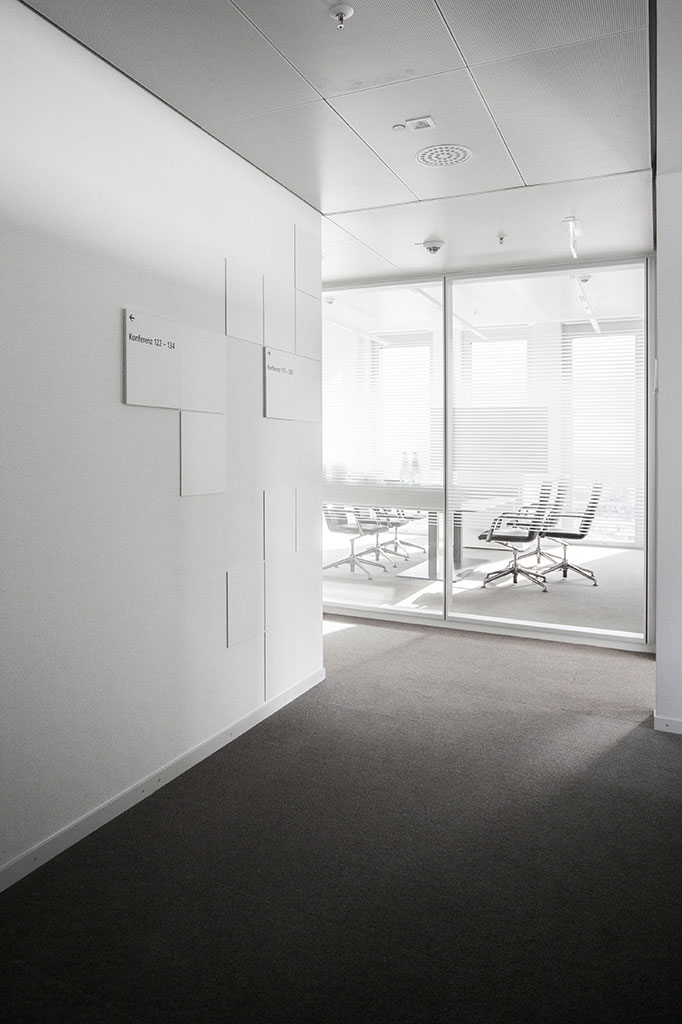 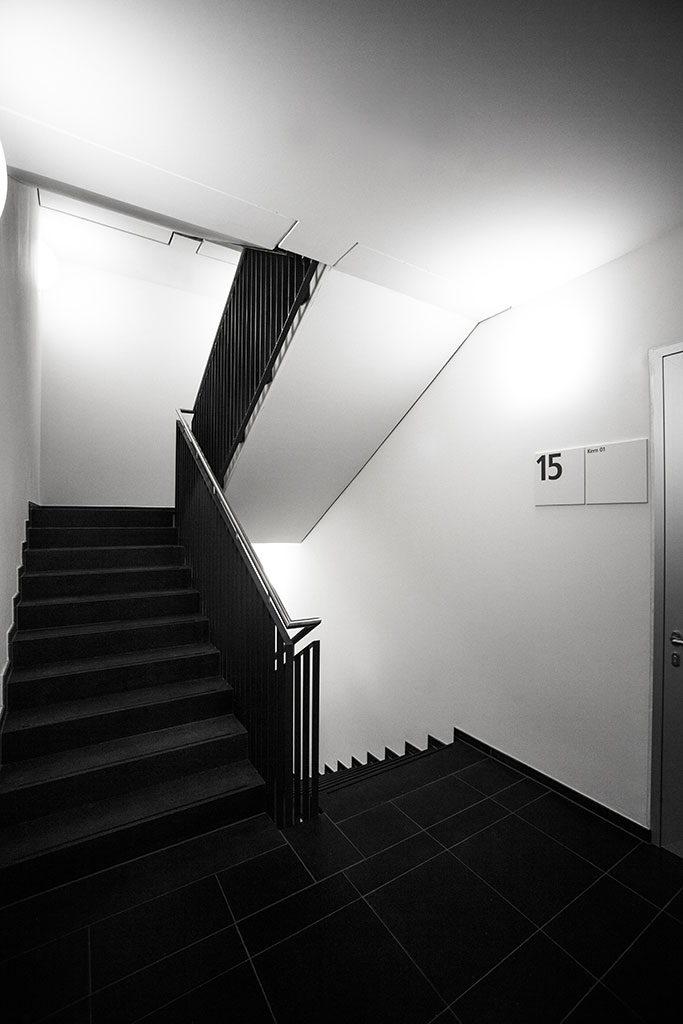 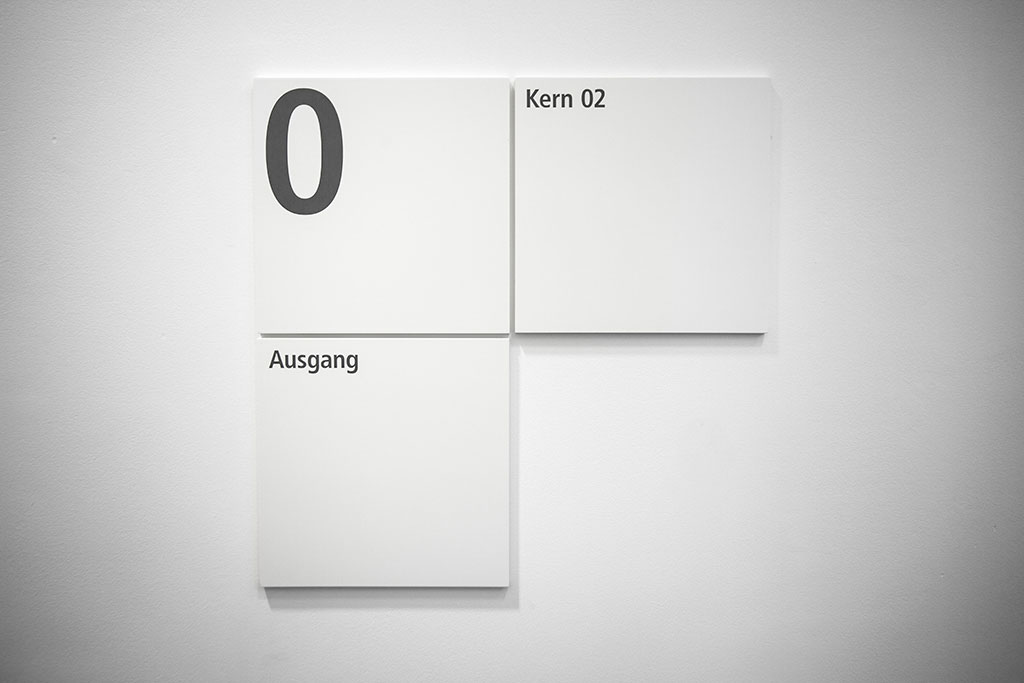